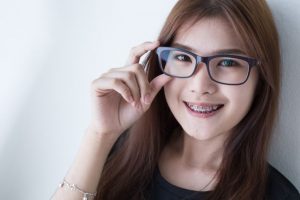 While it’s true that orthodontic treatment is effective at virtually any age, starting treatment early makes the most sense for many children. The American Association of Orthodontists advise that kids should have an initial orthodontic screening at age 7. Early evaluation isn’t necessarily followed by early treatment; in most cases, if orthodontic work is not needed, we simply monitor your child’s growth patterns until we see that it’s time for treatment to begin. This gives us an opportunity to get the best results in the most efficient way, and to help prevent future problems. In some cases, however, treatment is recommended and getting an early start can speed progress, save money and even prevent the onset of problems that can seem unrelated to orthodontics. Recent studies have shown a connection to sleep problems and even ADHD with misaligned teeth and jaw function.

As a child grows, the first adult molars have typically started to emerge by around age six. This, along with other developmental markers, lets us determine the basic alignment of the teeth, from front to back and side to side. Often, it’s possible at this point to determine whether there is adequate room in the mouth for all of the permanent teeth — and, if not, to take action.

When Earlier Treatment Is Better

For many of our patients, we recommend treatment around ages 11-14, when all of the baby teeth are gone and many of the permanent teeth are in place. Sometimes there are conditions that are easier to treat when detected early as mentioned above during the initial evaluation at around 7 years of age. Your child’s natural growth processes are moving at full speed and the orthodontist is able to get results easier in these cases. Below are some examples where earlier treatment can really help the corrective process:

When you bring your child in for an early orthodontic screening we can help you recognize and correct any habits your child has that could be detrimental to the alignment of their teeth and jaw. Again, the earlier the better around age 7, as any needed treatment is easier, faster and potentially less expensive if done early. Some of the habits and their effects are:

If your child is experiencing any of these behaviors, we are able to offer various orthodontic solutions that will prevent future problems that can be caused by them. An early orthodontic screening is key to assuring your child has the best possible outcome for their bite health.